balda Posted on February 9, 2015 Posted in moderated No Comments

I’d been interested in Bitcoin since I first heard of it in early 2013. I even bought a few then, but I never had much chance to use it or interact with the community until I started selling it to people I met online. Setting up your laptop in various public libraries on both sides of the Atlantic and counting out bags of cash with Bitcoin buyers really makes you appreciate things.

It started innocently enough with the need to transfer money. All my money was in a US bank that I couldn’t access in England, but that same bank was connected to Coinbase, a service only available in the US that allowed me to buy Bitcoin at market price. I then sold them via localbitcoins.com, which is like a Craigslist for the digital currency—you post an ad with a price and anyone interested responds. It’s most well known for facilitating face to face transactions, a rarity in the Bitcoin world.

After that first trade, I realized the price was 5-10 percent higher in pounds sterling. The reason for this is likely because the UK bitcoin infrastructure is comparatively underdeveloped. There are few exchanges or services such as Coinbase that operate within the nation, and thus buying Bitcoin is comparatively difficult.

Once I realized I could buy in the US, where it was easier, and sell in the UK, I promptly repeated the cycle with the rest of my dollars. After selling all the bitcoins I bought, I sent the money back to the US via Transferwise to start the cycle over again. I sold the bitcoins at a markup of 8-10 percent, but people kept buying and each time my small pile of money grew slightly larger. 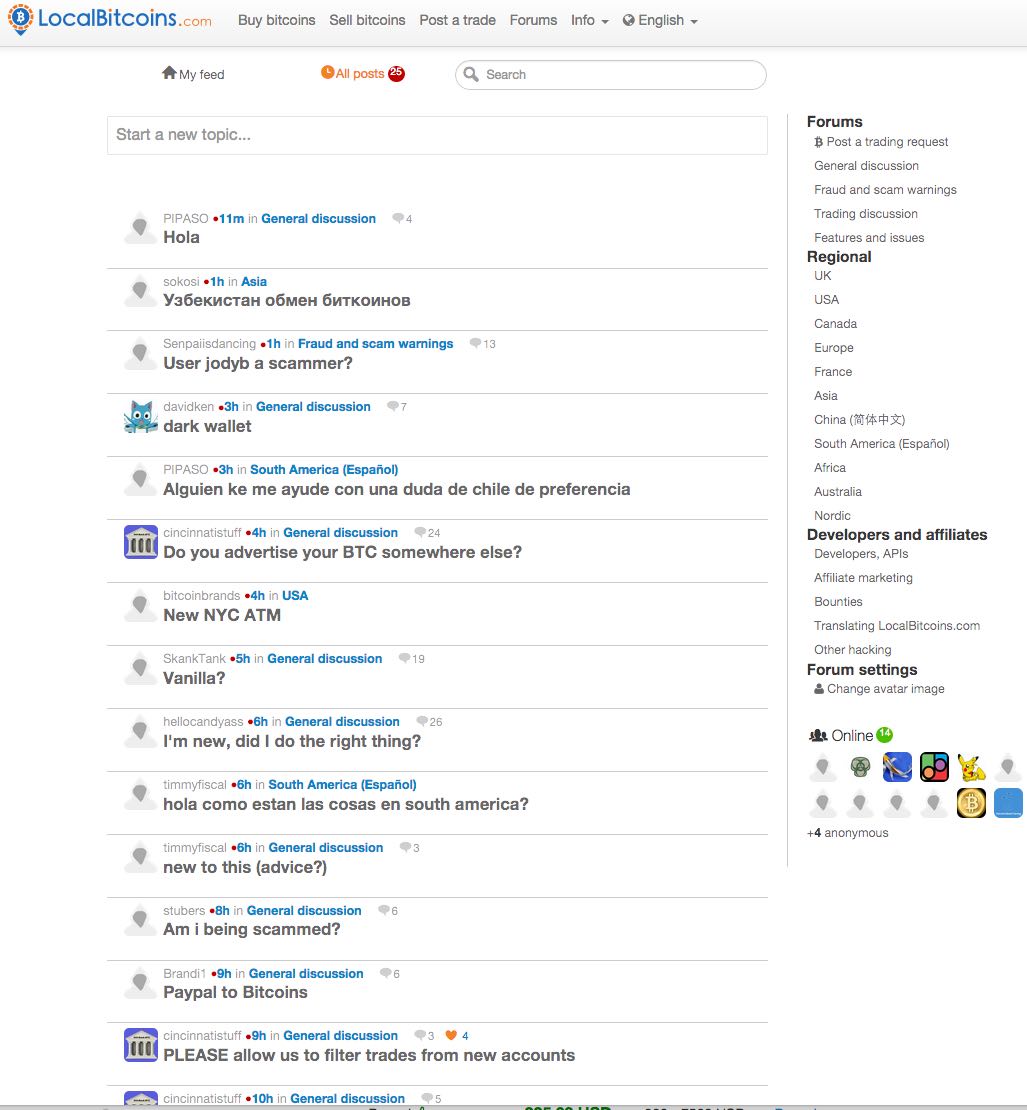 Initially, I accepted deposits directly into my UK account, but then I set my price lower for face to face meetings because I was curious to meet the people on the other side of the computer. I was writing my dissertation for my MA and spent lots of time in the library anyway, so I started directing customers to the various work stations I occupied.

The first person to respond was Danny, and he wanted £2,240 ($3,500) worth of bitcoins, which seemed like a lot to me at the time. I was nervous when I set out that afternoon and tried to find a table that was in view of enough people to feel safe, but private enough that not too many people would see what would surely look like suspicious activity.

When Danny came I had trouble logging onto the wifi and tried to make small talk. Danny was a welder,and had had a lot of work recently and a windfall of cash.

“These are going to make me rich one day,” he told me. “And screw this Tory government anyway. I don’t want them tracking everywhere I spend my money.”

I was finally able to log on and Danny emptied his backpack onto the table. There was a mess of crumpled bank notes piled between us. I slowly counted them out, put a much neater stack into my own backpack and input the release code. Danny smiled.

“Can you sell more another day?”

“Okay, the number I gave you before is to a burner phone, take this number down and I’ll text you when I need some.”

It felt a lot like I just became a drug dealer.

I wasn’t the only one who thought that. A few months after I started selling, I lost access to online banking for my UK bank, Barclays. I went to a branch that same day and they told me the account was under review and withdrew most of the remaining balance. The next week I received a letter in the mail stating that I had violated the terms and conditions and my account was being closed. 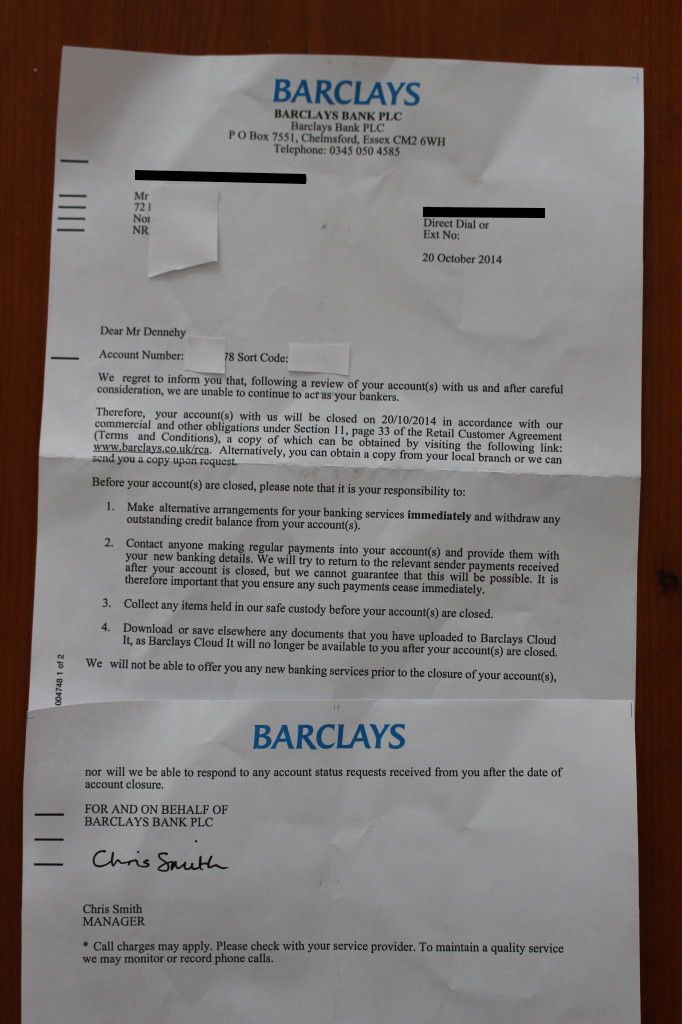 While the general policy is to give the customer sixty days to withdraw any funds, this particular, unnamed, violation required the bank to close the account without warning and seize any funds.The employees at the branch and the customer service representatives over the phone all told me they could not speak to me about the circumstances of the closure and I lost the few pounds still in the account.

I knew I was playing in a grey area and that the increase in activity might raise some flags, but that abruptness of it all surprised me. I was undeterred. I opened a new account, became more cautious, and continued meeting new people.

Months later, after I had moved back to the US but still accepted UK bank transfers, my new account suffered the same fate. I called the bank multiple times but the best answer I received was that my account had been marked as fraudulent and nothing could be done over the phone, though I was welcome to walk into a branch and try my luck there. I only had around 30 pounds in the account at the time. By that time most of my business was in the US anyway.

When I began selling Bitcoin in the UK, I assumed my customers were willing to pay more because there were not many options available. In the US, it was much easier to use a large exchange or broker, as I did, and buy at market price. Still, people kept buying from me. In fact, in an effort to try to raise less flags by reducing the frequency of my trades, I raised the margin to 12 percent and increased the minimum amount, but it hardly affected the frequency of trades.

Using exchanges or brokers require you to link bank accounts, submit passports and drivers licenses, and give up any privacy. Some people do not have all the required documents, or do not want to give them up. Coinbase also waits for my bank deposit to clear, so there is a four or five day delay from when I purchase bitcoins until when I receive them. When I sell them, the buyer has them fairly anonymously and near instantly. A lot of people seem willing to pay extra for that convenience.

“I’m in the back, in the reptile section.”
My customers are an odd mix. After moving to New York, a middle-aged man in a suit came to the library, set down an envelope with $6,000 of crisp new hundred dollar bills, and walked away without a word.

Others seem thirsty for conversation. Some are well versed in the technology and looking for a sympathetic ear, while others are new to it and full of questions. Ryan, 17, met me on his way home from high school.

“Some of my friends used Bitcoin to buy fake IDs,” he told me. “But I’m more interested in the technology.”

Ryan didn’t have a bank account or credit card and used Bitcoin to make all his online purchases. Long after I counted his cash and put in the release code, Ryan sat talking, rattling off terms I had never heard of when I was his age.

“Fractional reserve banking isn’t just how banks make money, it’s also how governments finance war. It’s fucked.” He was on a roll. “That’s why we need a politically agnostic currency with predetermined supply flows; Bitcoin will unfuck the world.”

I met a Chinese couple in McDonald’s one afternoon when the library was closed. They recently emigrated from China and their English wasn’t very good, so communication was a struggle, but they had a lot of questions. They were turning their cash into Bitcoin to send money home. “China [does] not allow us to send money to family, Bitcoin does,” they told me.

Another curious client contacted me via Mycelium, an Android wallet which has a feature similar to localbitcoins. We agreed to meet in an area I wasn’t familiar with—all I knew was there was a big pet store. When he called, I told him, “I’m in the back, in the reptile section.”

He was a hedge fund manager writing a report on Bitcoin and decided he should buy some and experiment with it to help inform his report. Geckos bathed under heat lamps behind us while we chatted.

“I’m most interested in the blockchain [the public ledger which tracks all Bitcoin transactions],” he told me. “Property deeds and commodity ownership records could all be securely and transparently held there, and that would be a huge innovation.”

Bitcoin can change people too. Before I read about Bitcoin, I was something of a neo-Luddite. My electric toothbrush was the third most advanced piece of technology I owned, after an old laptop and even older flip phone. And now I sell cyptocurrecy to hedge fund managers looking for the next big thing.

I sell Bitcoin because it’s a fairly easy way to make money, but I also sell it because I want the community to grow and the technology to succeed. Before I started dealing, it was just an abstract concept. Some buyers are purely speculators, but the more I interact with them, the more I realize how many different types of people are not only studying Bitcoin, but also using it.

And I am too. I turn all of the profit from my sales back into Bitcoin and use it to pay for everything from beer at a local bar to this month’s rent. There are still a lot of uses of the technology that are abstract concepts, but Bitcoin as a currency has become very real to me.