balda Posted on June 4, 2014 Posted in moderated No Comments

White letters on a black background reads: ” We are looking very smart people . To find them , we have developed a test . This image is hidden message . Find him , and it shall indicate the road leading to us. We will be happy to meet those few that reach end of good luck. ” At the end of the signature : ” 3301 .”

The original of this report was released in January 2012 on an anonymous forum 4chan and managed to attract a lot of attention . As conceived its unknown authors , the trail immediately sought out the very smart people. Some of them reached the goal , and presumably joined a group called the Cicada 3301 . But what is this group and what she was knitting toils , yet remains a mystery. All that we know – it’s the stories of those who have gone astray and did not pass the job to the end. Joel Eriksson, 34 -year-old analyst from Sweden, told the British edition of The Telegraph about his research , which began with the fact that it has got into the hands of the message ” Cicadas .” He quickly discovered that the picture was zasteganografirovany two lines , and were key figures 3301 . One of the lines – ” Tiberius Claudius Caesar” , the second random characters. Tiberius Claudius Caesar mention – hint at the Caesar cipher , is one of the oldest and simplest methods of encryption. Each letter of the alphabet is assigned a number , then the rooms are shifted by a certain number of positions and the text is written with a view of the shift . Ancient Romans could use this simple technique simply because no one knew about the possibility of deciphering messages . Eriksson quickly picked up the desired number (four) and found that the row was encrypted hyperlink .

Found a link to a picture of a duck and separately signed on “Oops ! It’s just a decoy. You seem to know how to get the message. ”

This time the key was not there and had to use the interpretive program OutGuess. With the help of pictures catch link to the forum that Reddit, where every two hours there is a new line of books , accompanied by mysterious symbols of dots and sticks. Eriksson again rose to the occasion : the text he chose not to pay attention, but at the points and sticks recognized Mayan figures . From this point on the complexity of puzzles grew by order, and even steel and then come across the image of cicadas . This is not a random choice for the group logo : some kinds of qi cad hatch only once in 13 or 17 years to avoid synchronization lifecycle predators feed on them , 13 and 17 – prime numbers and prime numbers are known to play an important role in cryptography .

Variety puzzles also grew. Ciphers have alternated with tests on knowledge of history , philosophy, literature and music. Walking on the trail enthusiasts faced smiling with quotations from ancient Welsh and works with references to the Victorian occultism , as well as demonstrate knowledge of classical music. One of the mysteries referred to the famous poem by William Gibson’s ” Agrippa “, famous for the fact that it is spread on the disks as a program that destroys the text after the first reading (but now ” Agrippa ” available at Gibson ) .

Be Ericsson alone in his research , he would have come to a standstill much earlier. But a few days after him came across the original picture, he found that the trail are still thousands of amateur cryptanalysts and share solutions on 4chan and other forums. In particular, the forces of the collective mind of deciphering clues Welsh novel was obtained within hours .

Next become even more interesting . Another message contained a call to call the phone number registered in Texas. Callers were able to hear the recording on the answering machine , where a synthetic voice told to find another prime in the original picture. The number was found, and it pointed to a poster 845145127.com ( since it stopped working and , apparently , was captured by someone ) .

The site was located cicada image and a counter showing the countdown. When the numbers reached zero , instead of them appeared 14 coordinates GPS, pointing to a point in Paris, Sydney , Seoul , Warsaw, Seattle, Arizona, Ka lifornii , New Orleans , Miami and Hawaii. Living near the volunteers found easily , and soon in the hands of the community was a selection of photos , posters with QR- codes. At this point, have disappeared in the last doubts that ” cicada ” – this is no joke cryptographer single : organize it all without having teams of several people , it would be simply impossible. 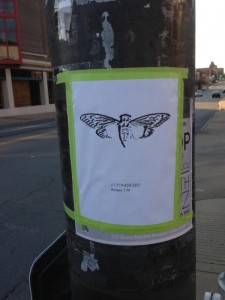 Despite the fact that some tasks could not be done without recourse to the community , posts from forums is not always helped trail ” Cicadas .” For example, someone with a nickname Wind ( supposedly a girl from Michigan ) for some time purposely tried to clean other up the wrong tree . The reasons for this may be different. It is possible that Wind wanted (or wanted ) to confuse competitors to solve all alone . Perhaps the fact that it was one of the ” Cicada ” and he tried to reduce the productivity of teamwork.

On another occasion, someone posted a message on Pastebin , where NADI fats that is an ex – member of the ” Cicada ” and do not advise anyone to join her . Allegedly ” cicada ” – a religious organization masquerading as science , and it made ​​serious people with bad intentions : former military officers, diplomats and academics do not meet the present world order. According to an anonymous author, their goal – to transform humanity into Nietzschean ubermenshey . ” It’s a dangerous business , and their abominable practices ,” – he concluded his message .

Meanwhile searches were close to a turning point . Message received from the collected worldwide QR – on to ld in bicycles on site in the Tor. Unknown that saw its first visitors, but everyone else was waiting for a message ” We need the best and not followers ,” It is said that a select few have received emails purportedly invitation tion to solve a few puzzles in the private mode. Joel Eriksson, as you might guess , in their list is not ranked , and probably because it is so easily started giving interviews to newspapers . ” If my sleep cycle was slightly different , I probably would have been among the first .” – He complained in an interview with The Telegraph. Well, so slept slept !

After a few weeks of cicadas received a new message. It appeared on the forum Reddft and read: ” Hi, We have found those individuals that are looking for a months-long our way over. Yet . The ensuing pause lasted eleven months and was interrupted by January 4, 2013 publication of a new picture with the text. ” Welcome back! Our search for smart people continues. ”

And again, all spun by the usual program. In the picture was hidden poem of the “Book of the Law ,” written in the early twentieth century occultist and magician Aleister Crowley breakaway ; book helped find a link to a 130- MB file , consisting of prime numbers ; Then followed an MP3 file with an unknown song , preceded by the singing of the cicadas . There spotted a link to an account on Twitter , which is published at first glance random numbers. They , in turn, proved to be completely random and not contain code based on geometry – the Kabbalistic method to seek hidden meaning in the words , but instead of Hebrew used the Anglo- Saxon runes .

Recent steps have been very similar to what it was a year ago : the reference to a site on the Tor coordinates seven points , including in Moscow and Okinawa ( Japan) . On this track again broke : the first handful of applicants missed the private phase , the rest were out of work . According to rumors, the private part of the test began with the personal characteristics of the scheme , similar to the system Myers – Briggs .

In January this year listing ” Cicadas ” appeared again – this time in the same tweet , where previously published encrypted strings . And next – a new series of ciphers , quotations from books, runic inscriptions and other puzzles. Final at the time of this room is unlikely to be achieved, but this time hardly ” cicada ” give yourself and you’ll know what awaits candidates after the tests.

Sometimes such methods set resort security services . This, in particular , is known for British intelligence : during the Second World War, the candidates for School of Government codes and ciphers searched using crosswords published in the newspaper. And now this practice is thriving. School codes and ciphers now renamed the Government Communications Headquarters (GCHQ), the Internet is used instead of crossword puzzles , but generally are not changed much . In September last year, the site published GCHQ job offer and made ​​an encrypted message to applicants. Those who decided not a series of simple cryptographic tasks could relax in one of the classified positions. Something similar in 2010 and made ​​the U.S. Air Force : they invented a coded message to hide its logo .

Can not for ” cicada ” brilliantly appointed hiding offer of employment in the CIA, NSA , MI6, Mossad , or one of these organizations ? This option can not be excluded , but still public service , even if used for hiring practical tasks , yet revered before doing it on their websites, and not through 4chan.

So far, ” cicada ” can be considered analogous to ARG, and so that “Bees” and other popular entertainment decade ago seem childish prattle . And it’s not just a special complexity and fascination of riddles. Perhaps not even the organizers to protect themselves in secrecy , so look for that dream applicants . Path to the ” Cicada ” has all the features of the game , but the game is not. A real mystery and adventure , as you know, attract far more than imaginary .